Digital Transformation: ECMR – A digital future for the CMR document

As an industry, goods have been passing from one establishment to another based on a physical signature for centuries, in fact, the first proof of delivery has been traced back as far as 1685. Despite the digital revolution and the technology that we currently have at our disposal, not a lot has changed since then in terms of how goods are transferred through the supply chain, with many companies still using paper and ink to validate the delivery and reception of goods.

The CMR Convention (full title Convention on the Contract for the International Carriage of Goods by Road) is a United Nations convention that was signed in Geneva on 19 May 1956. It relates to various legal issues concerning transportation of cargo by road and has been ratified by the majority of European states.

The document is required for international road transport. CMR stands for: 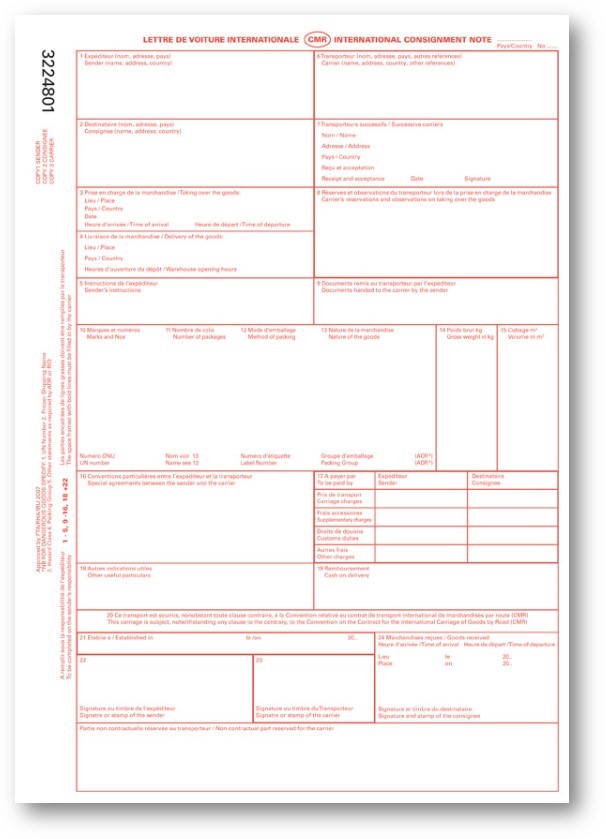 As of the 27th of May 2008, according to an additional protocol to the CMR-convention, it is also possible to use an updated electronic consignment note – eCMR. The first cross-border usage of eCMR took place on 19 January 2017, between Spain and France.

Electronic CMR – How does it work?

Essentially the ECMR will follow the same principle as the traditional paper based method an adhere to all of the principles of the original convention, the key difference is that the ECMR will link all parties involved in the supply chain via a digital platform (normally developed using blockchain technology), as the goods move through the supply chain, the ECMR is updated electronically by each of the parties involved at each stage.

One of the key advantages being that the progress of a consignment can be visually tracked via status updates as it moves through each of the key milestones within the delivery process, significantly increasing transparency and efficiency in the process with updates occurring in real time, including problematic or damaged consignments where images can be taken and assigned to the document so that all stakeholders are able to respond more rapidly with disputes and initiate the relevant disputes or insurance protocols that are required much more rapidly.

Signatures are now done digitally, and depending on the platform, can either be performed on glass, where the image is captured and assigned to the document or using another approved form of encrypted digital signature (such as a unique identifier code) where the details are assigned to the relevant document.

ECMR – What are the advantages?

Some of the key benefits of the digital CMR focus around the following areas:

One of the most obvious benefits is the direct reduction in the use of paper which has a significant environmental impact. In the EU alone approximately 377,000,000 milllion CMRs are used annually in cross border transport. That is the equivalent to:

As we are all currently witnessing with the current pandemic, there is also a strong argument related to health and safety of our frontline workers. The digital CMR removes the need for paper passing from one person to another as it passes through the supply chain, reducing the risk of contamination, where a virus can be present for a considerable time.

The digital nature of the ECMR allows stakeholders to track consignments in real time as they move through the supply chain.

Upon final delivery, the completed CMR is instantly available to all parties which will allow companies to initiate their invoicing processes for goods received. Not having to wait for the driver to return with the original CMR can accelerate the billing process by weeks, which will help companies improve their billing processes and ultimately cashflow.

Damaged goods can also be reported in real time, by attaching photos to the document within the platform it can help reduce the time that disputes take to resolve thee issues, and helping to expedite any necessary insurance claims.

There are significant savings to be made across the sector when considering the administrative efficiencies that can be gained with a digital CMR, the below comparison demonstrates where these savings can be achieved:

Why is ECMR not standard practice?

You may be asking yourself, given the clear benefits that ECMR can offer companies, why is this not standard practice across the industry?

One of the main reasons is that some countries are yet to ratify the new protocol, one of which is Germany, which given the importance of the German export economy across Euorpe is viewed as the missing link in the chain. Below is a list of countries who have ratified the protocol:

In total, the eCMR protocol has been ratified by 25 countries so far:

Several other countries, such as Germany and Italy are currently working on the ratification of the eCMR.

Another secondary reason is that some companies are hesitant about the technology, whilst the paper based model is overall less efficient, many companies have optimized their own ERP systems to manage the paper based CMR, and until the ECMR is more widely accepted there is clearly still some resistance to make the digital leap.

What is the plan for ECMR and what are the next steps?

Vrio has already established a key partnership for this technology and is working hard to introduce this service during 2020/2021 in preparation for the introduction of ECMR as a new standard within the short and medium term future. For more information, please do not hesitate to contact Vrio.

Because these cookies are strictly necessary to deliver the website, refuseing them will have impact how our site functions. You always can block or delete cookies by changing your browser settings and force blocking all cookies on this website. But this will always prompt you to accept/refuse cookies when revisiting our site.

If you do not want that we track your visist to our site you can disable tracking in your browser here: